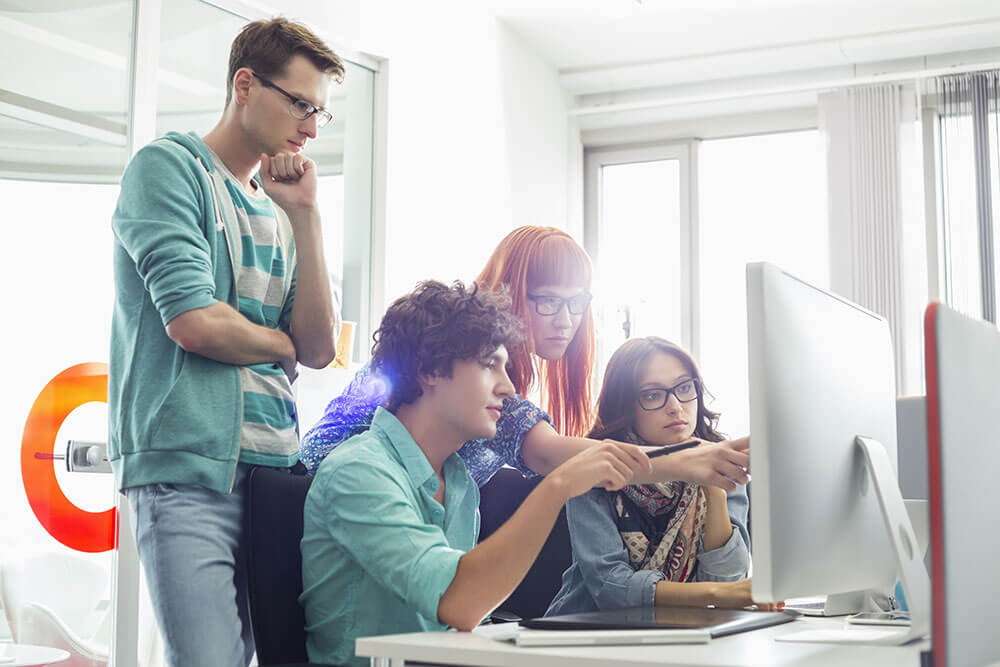 Java is a general-purpose programming language that is class-based, object-oriented, and specifically designed to have as few implementation dependencies as possible.

Java Powers the Biggest Technology
Mobile. Web apps. The Internet of Things. Big data. Machine learning. Cloud platform and cloud infrastructure. The next big things are here now, and Java is at the centre of them all.

Whether you’re developing the robust enterprise back end, building the agile front end, or thriving in a DevOps role, Java skills can up your game. With more than 10 million programmers and 13 billion Java-enabled devices worldwide, Java is the language that connects applications to data, data to people, and people to their digital lifestyle.

Javascript or JS is a high-level programming language which is also interpreted as a dynamic and prototype-based language. JS is one of the core technologies of the World Wide Web along with HTML and CSS. JS is highly recommended to build high-performance enterprise application
across web and mobile. Pythonwise is in the business of custom software development and specializes in Software Development Practices by Agile Methodologies in terms of Project & Product development. Having a robust team with rich experience in core Javascript and frameworks and libraries including Node.JS, KnockOutJS, Backbone.JS, Angular.JS for rapid software development. At Pythonwise, we provide the services in following frameworks

Python is a robust, powerful, dynamic & flexible programming language first released in 1991. Python’s large amount of libraries and robust web frameworks has transformed how applications and websites work. Be it machine learning applications or a simple enterprise software, Python provides a straightforward approach and ultimate accuracy. Python has recently retained the Most Popular Programming Language of 2018, being the first choice for Data scientists around the globe.

Python is also the most popular amongst new age startups, the reason being open source, clean and powerful object-oriented programming language, which is easily readable due to the concise usage of syntax. Other valuable features of Python include :

Programming Language is nothing without its community of developers. Python has
achieved one of the most active communities in the world of programming languages.
To all your queries, questions and technology barriers & ideas, the Python community is
helpful and collaborative at all times.

Why use Python?
1. Companies like Google, Netflix, Quora, YouTube, Instagram, NASA, Dropbox, &
Spotify to name a few use Python for website development.
2. Rapid Development is possible due to fewer codes and less complexity.
3. Groups of code can be made known as modules & package which are then easily
comparable by Perl, Java, Scheme or Ruby & Rails.
4. Powerful, object-oriented & functional programming that supports multiple
programming structures.
5. Immense security for web and mobile application, yet cost-effective.
6. Highly optimized and favorable for cross-platform development & portability.

Under a DevOps model, development and operations teams are no longer “siloed.” Sometimes, these two teams are merged into a single team where the engineers work across the entire application lifecycle, from development and test to deployment to operations, and develop a range of skills not limited to a single function.

In some DevOps models, quality assurance and security teams may also become more tightly integrated with development and operations and throughout the application lifecycle. When security is the focus of everyone on a DevOps team, this is sometimes referred to as DevSecOps. These teams use practices to automate processes that historically have been manual and slow. They use a technology stack and tooling which help them operate and evolve applications quickly and reliably. These tools also help engineers independently accomplish tasks (for example, deploying code or provisioning infrastructure) that normally would have required help from other teams, and this further increases a team’s velocity.